Working of Lambda Layers and Runtime

Amazon came up with many innovative and interesting announcements about new technologies and services provided by them during the recent AWS "re:Invent" event. One of the widely discussed topic in the event was "serverless". With the increasing usage of AWS lambda, it is imperative to understand anything that impacts the lambda architecture in any way. The below two announcements were quite important for security professionals as they directly deal with serverless changes and its implications.

Firecracker - Firecracker is Amazon’s micro VM, which runs lambda functions, and it will be open source. Hence, anybody can play around and understand it's working. For more details: - https://aws.amazon.com/blogs/aws/firecracker-lightweight-virtualization-for-serverless-computing/

Lambda Layers and Runtime APIs - Lambda functions allow a holding place in terms of layers. One can deploy set of layers and can execute these layers with Runtime APIs or leverage packages deployed in these layers. For more details: - https://aws.amazon.com/about-aws/whats-new/2018/11/aws-lambda-now-supports-custom-runtimes-and-layers/

In this post, we are going to explore Layers and Runtime APIs.

AWS was supporting a set of runtime environment predefined within lambda functions. With the introduction of Layers and Runtime APIs, that it no longer a limitation. It now supports and allows to load one's own runtime binaries and leverage it across the lambda eco-system. Thus, now support has been added for Ruby, C++, and Rust etc. making it a Bring Your Own Runtime kind of scenario.

Their tutorial (https://docs.aws.amazon.com/lambda/latest/dg/runtimes-walkthrough.html) explains how to configure and invoke one's own runtime through layering and APIs. We are going to modify the scripts mentioned in this tutorial and deploy our runtime through the management console for better understanding.

First, we need to make our own bootstrap to start the activity of lambda functions within shell.  This is the shell script which one can run and initiate any environment and binaries within it. It supports runtime APIs so one can fetch the "event" and pass it to lambda handler.

Here is the sample bootstrap script: -

# Processing
while true
do
HEADERS="$(mktemp)"
# Get an event

We just have to make sure these files are "chmod 755" as shown below: -

We can zip the file to "bootstrap.zip" and create a new layer for lambda. 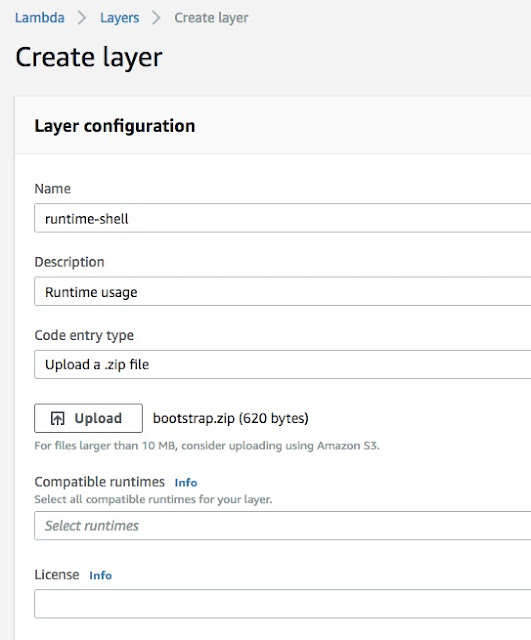 We can upload the zip file and create a runtime layer as below: - 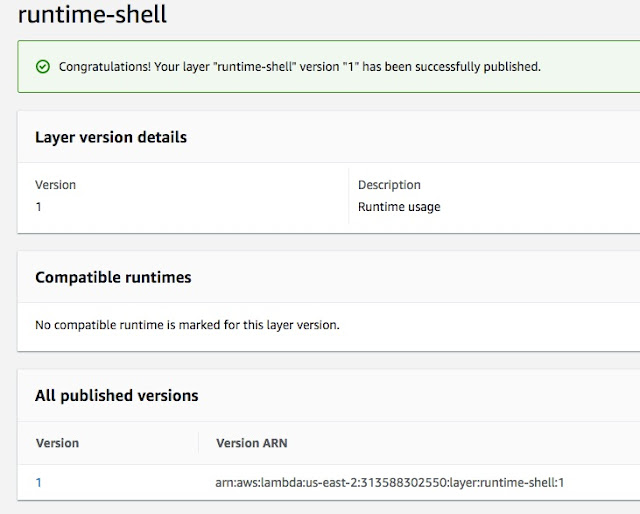 We select "custom runtime" as our environment. Next, let’s load the layer which we want to use: - 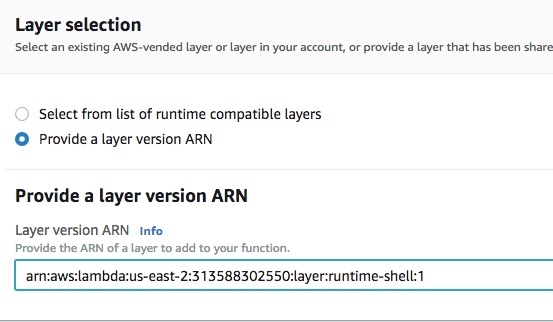 As shown in the above screenshot, we pass on ARN to the layer and then it is ready: -

Next, let’s load simple echo function as below (function.sh). We are doing simple cat to the entire dump we collected in the bootstrap along with the event.

All set! We can invoke the function as below: - 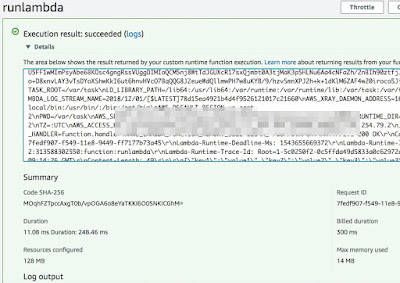 We can also invoke the function through our script (scanLambda.py) as below: - 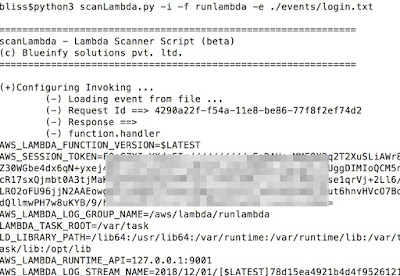 We are getting a dump of all the variables available in the bootstrap layer: - 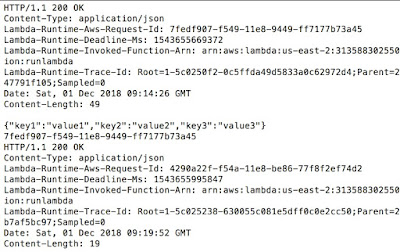 Above, we have cURL calls made to APIs.

Finally, we have echo coming back from the function itself.

Lambda Layers and Runtime APIs enable the use of binaries or shell scripts as well as our choice of programming languages. Moreover, one can centrally manage common components across multiple functions enabling better code reuse. This implementation will have its own set of security concerns as well – thus making it necessary to understand the customized layers and runtime APIs before evaluating the function from a security standpoint.