WebSocket is gaining popularity with HTML5 architecture and has wide support from various browsers now. WebSocket allows full duplex communication over TCP as defined in the RFC 6455. Applications need such fast connection with data push coming from servers over polling data time to time. Hence, during our testing we started getting applications running WebSocket. It is imperative to understand the threat model for WebSocket usage and some of the concerns. In this post we try to address this.

The WebSocket protocol has been defined in RFC 6455 (http://datatracker.ietf.org/doc/rfc6455/?include_text=1) along with the WebSocket API (https://w3c.github.io/websockets/).  Hence, it is possible to use API via JavaScript and embed code right into HTML pages. As soon as a connect call is made by the browser, the HTTP Server switches to WebSocket protocol when it come across an "Upgrade" request call from the client on the same TCP connection. Applications support WebSocket calls via specific URLs like ws:// and wss:// on the pages.

WebSocket has become an integral part of Browser's communication stack as shown below.
We covered a post in the past on new Architecture over here ( HTML5/Browser Evolution and Threats) 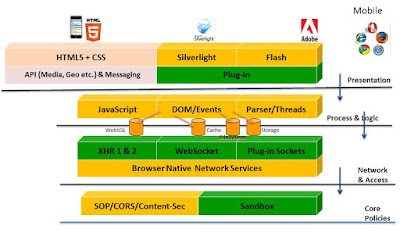 Following is a simple upgrade call coming from a browser to a HTTP server.

Now, if the server is supporting the protocol then it will allow switching by the following response.

Hence, at this point a tunnel is established and bi-directional communication can begin between client and server.If we look at API, then it is simple. Initializing WebSocket object

Once that is done one can go ahead and use methods like onopen(), onmessage(), send() and close().

If you want to dig more into WebSocket –
http://www.html5rocks.com/en/tutorials/websockets/basics/

We have traditional web applications running over HTTP request and response. One of the problems with traditional usage of HTTP is of refresh and reload. Ajax helped, in a way, to solve this problem by making a quick async call and updating DOM. But in this mechanism, there is polling involved and it is not truly a faster bidirectional channel between the two. To improve overall efficiency one can use WebSocket in cases like the following :

Also, developers are becoming innovative and utilizing JSON, XML etc. over WebSocket. Hence, there is no limit to how and where WebSocket calls can be used.

WebSocket has some inherent weakness like allowing cross domain calls and few other issues. Hence, it is important to properly assess the threat model at development stage. Here are few issues one should check during testing -

By design, WebSocket protocol doesn’t abide by SOP (Same Origin Policy). Hence, a browser can initiate a cross domain WebSocket call to any domain on the Internet. It is not required for an application to make calls to its own domain only. This can create issues and security threats. It allows an attacker to establish a connection or force any victim’s browser to initiate a connection as well. When WebSocket makes an “upgrade” call over HTTP, it sends “Origin: domain” header in the HTTP request. The browser itself adds this particular header based on its current state of DOM/location. This header cannot be tampered with by script. Hence, to avoid DoS and CSRF type attacks one can validate this header on server side before switching the protocol. Also, it is possible to perform DoS by opening multiple socket connections. One can avoid that by passing a token to the browser before protocol switching. Hence, only if protocol/upgrade switching request comes to the server with that token the server should allow the connection. This will avoid possibility of DoS.

CSRF with WebSocket and Stream hijacking

As discussed in the previous section about “Origin”, WebSocket is not following SOP. This allows an attacker to put a dummy page on Internet and drive someone to that particular page. As shown in the below figure, an attacker can leverage the following scenario: 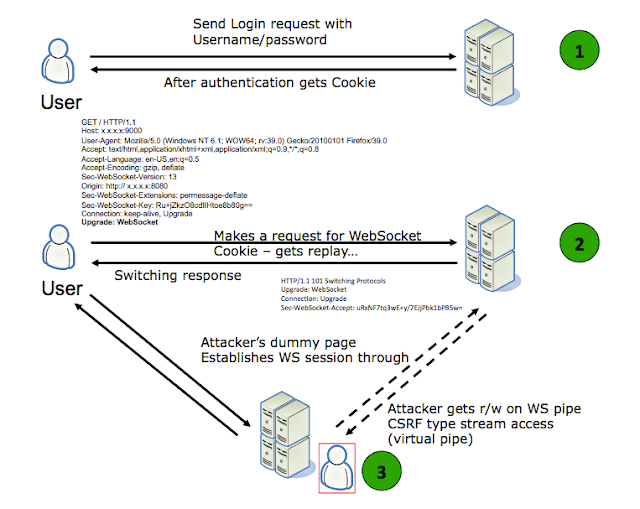 You can read more on this below. This attack is termed as CSWSH (Cross Site WebSocket Hijacking)
https://www.christian-schneider.net/CrossSiteWebSocketHijacking.html

Again, for defense one can verify “Origin” and add extra CSRF tokens to validate legitimate users for stream processing.

It is also important to know on which tunnel WebSocket is running. One needs to make sure that it is running over SSL channel. If calls are going over a non-SSL channel then it may end up leading to information leakage and other related attack vectors.

A WebSocket call fetches new data from a server and dynamically loads things in the existing DOM with various APIs. It is imperative to validate incoming content before loading into DOM and protect against DOM based XSS and other types of variants. Also, it is obvious to protect server side injections and streams going over DOM calls. Burp and ZAP both have capability for evaluating WebSocket calls.


Following checks and validation can be made for WebSocket review :

The WebSocket protocol is a really good and efficient way for communication in certain scenarios, but at the same time it brings a new set of threats. Hence, developers have to keep security issues in mind during implementation both at server as well as client end. Now a days, there are many applications on the Internet which are using WebSocket heavily. Also frameworks and technologies like Microsoft’s signal.r are based on WebSocket. There are many libraries available for implementation of WebSocket on the server side, but by default they do not check for security issues. Hence, one needs to keep security issues in mind while implementing them and while performing reviews.